Skip to content
Posted to the Ethnos Project by Mark Oppenneer on April 18th, 2011

“From almost the beginning, there were too many things that too many people wanted for them all to fit in just one feature film.” This is not so much a sell for the movie (released in 2006), but a brief introduction the possibilities Indigenous film can have within a given community. Ten Canoes spawned several projects which attest to the power of the original project…

From Wikipedia: The film is set in Arnhem Land, in a time before western contact, and tells the story of a warrior Dayindi (Jamie Gulpilil), who hunts goose eggs while being told another story about another young man who, like Dayindi, coveted his elder brother’s wife. The sequences featuring Dayindi, set shortly before contact with white people, are in black and white, while shots set in the present and in the distant past are in colour. The film is narrated in English by David Gulpilil; all protagonists speak in indigenous dialects of the Yolŋu Matha language group, with subtitles. A narration in Yolŋu Matha is also available.

In the story told to Dayindi: a man (whose own younger brother desires his third and youngest wife), kills a member of a neighbouring tribe, whom he believes had kidnapped his second wife the previous year. To prevent all-out war, tribal laws dictate that the offending tribe allow the offender (or the killer) to be speared from a distance by the tribe of the slain man. The offender is allowed to be accompanied by a companion, and he takes his younger brother. Whenever one of the two is hit, the spear-throwers will stop, and justice will have been served. The offender is hit and mortally wounded but survives long enough to return to his camp, where he is tended to by his eldest wife for a period of time. Shortly after he finally succumbs, the elder brother’s kidnapped second wife finds her way back to the camp. She reveals that she had been kidnapped by a different tribe, much farther away and had taken this long to return. She mourns her lost husband, who had attacked the wrong tribe, though now she and the elder wife take his younger brother as their new husband. The younger brother, who was only interested in the youngest of the three wives, now has to care for all of them, much more than he bargained for.

And so, Dayindi learns the dangerous consequences of jealousy. 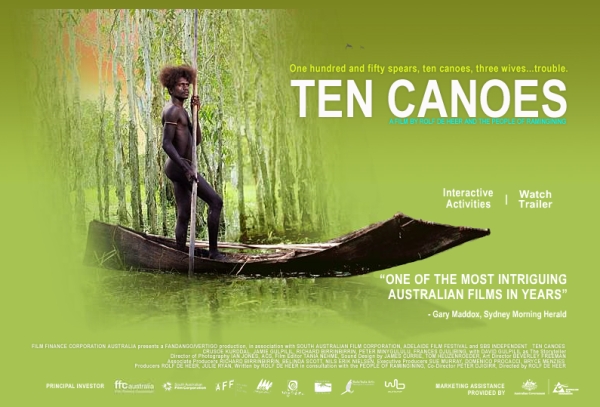 From Ten Canoes site: From almost the beginning, there were too many things that too many people wanted for them all to fit in just one feature film. Additional, associated projects arose almost at random. Some have been completed, some are works in progress, other await finance while a few of them languish, perhaps to be re-activated once more time and resources can be found.

First there was Eleven Canoes, which was a project to teach the young people of Ramingining how to use video recording and editing equipment so they could make their own mini-documentaries. This was highly successful, with almost twenty shorts and a renewed and improved media course at Ramingining School coming out of it. 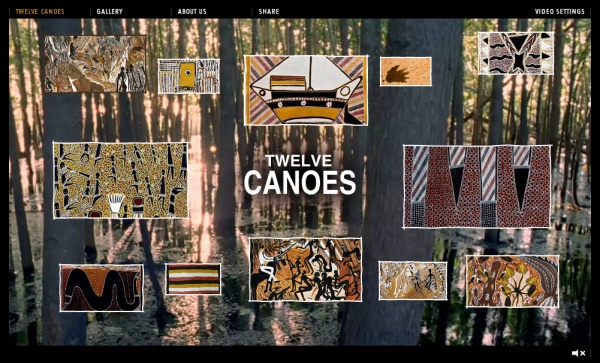 From Eureka Street: Then Twelve Canoes came into being. This is a website project, not about the film, but about the environment, culture and people of Ramingining… the people there have much they wish to communicate to the outside world; not only is a film insufficient, but a website can do much more, and transmit it instantly to the entire world.

This unusual movie became the nucleus for a number of additional canoe projects. Eleven Canoes introduced a video media course into the town of Ramingining to teach documentary making to the young people of the community. This contributed content to the interactive Twelve Canoes website where the people of Ramingining display the aspects of their environment, culture and people they wish to communicate to the outside world.

The digital media project 12 Canoes is a broadband website that presents, in an artistic, cultural and educational context, the stories, art and environment of the Yolngu people who live around the Arafura swamp in north-eastern Arnhem Land. The Yolngu people of the Arufura swamp are few in number, but their wealth of stories and artwork highlights who they are, and the importance of acknowledging and preserving their culture. In this context the website is an important reference and educational resource.

In 12 Canoes, Ganalbingu-Yolgnu heritage will be presented through the works and stories of key community members. By way of kinship they are the owners and managers of stories and history and are bestowed with the responsibility for telling them. While they are the keepers for the collective, their individuality will present aspects of their present and everyday lives in their hometown of Ramingining.

In this way, the Yolgnu community’s use of new media is very traditional in terms of the level of control they retain as a collective group over the representation of their life. Individuals are not the focus of this approach, nor are individuals encouraged to have their own voices and views.

From Ten Canoes site: Thirteen Canoes soon followed… a multi-media art/cultural exhibition, using the artefacts made for Ten Canoes, the artworks commissioned for Twelve Canoes, some Thomson photographs, perhaps videos from Eleven Canoes. And Fourteen Canoes was a logical extension…a book with the original Thomson photographs, the colour equivalents from the Ten Canoes shoot, photos of the Yolngu participants in a modern context, words to demystify the people in the photos.

Fifteen Canoes, a music preservation project; Sixteen Canoes, a project to restore the functioning of the closed-circuit television set-up at Ramingining; Seventeen Canoes, a video-making young people’s exchange project with other remote communities; Eighteen Canoes, a one-hour television documentary about the effect of Ten Canoes on the community.

It is clear that the Many Canoes will resonate in Ramingining for a long time to come.Sylvester Durrurmga, Marcus Dhamarranydji and Valerie Malibirr learning camera skills during the Eleven Canoes project.

From Mark: I am still looking for documentation about these projects. Please let me know if you have any leads!