Skip to content
Posted to the Ethnos Project by Mark Oppenneer on January 15th, 2015

The bilingual digital edition of the Codex Mendoza is the first attempt in the world to create a digital resource that permits an in-depth study of a Mexican codex and that allows a virtual repatriation of it.

Digital Codex Mendoza is freely available through its website and through the iTunes store. The resource is oriented to the wider public as well as specialized audiences including historians, paleographers, and students of Mexican or Latin American literature, humanities, sociology, and anthropology. 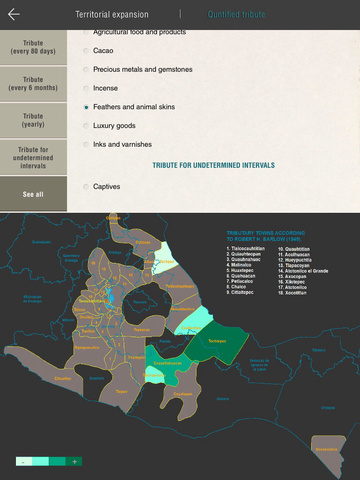 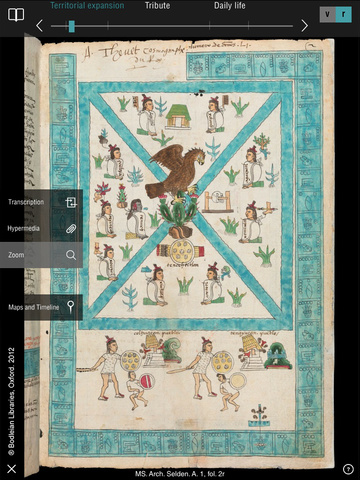 One of the many advantages of the digital edition is that the material characteristics can be studied in greater detail by making use of the zoom feature. Another function allows us to link the content of the codex with multimedia elements stored in remote locations that will help to provide context and increase understanding of the content.

Similarly, the ability to navigate and understand the codex through maps and geographic representations is an innovative contribution that allows comprehension of the codex’s content in spatial dimensions.

The transcription feature allows the user to automatically translate the text included in the Codex to Spanish, English or Diplomatic transcription.

Digital Codex Mendoza proves that digital resources are optimal for representing this kind of document, compared with paper editions. Because Mexican codices work as multichannel cultural devices, using multimedia and interactive features to study and represent them is quite natural.

The digital resource was created in collaboration with Bodleiain Library, Oxford, (where it has been held since 1659), King’s College London and University of California Press. It was developed in 2014, under the curatorial direction of Frances Berdan and Baltazar Brito.

The Codex Mendoza was created under the orders of Viceroy Antonio de Mendoza in 1542 to evoke an economic, political, and social panorama of the recently conquered lands. It has 72 illustrated pages glossed in Nahuatl, and 63 correspondent pages with Spanish glosses.

The Digital Codex Mendoza is part of INAH’s effort to highlight the importance of Mexican Codices for national history. This effort began in September, 2014, with the opening of the unprecedented exhibition, Códices de México, Memorias y Saberes, where 44 codices were shown for the first time to the general public. Codices are extremely sensitive documents in terms of preservation, so very few people have access to them. This is why the exhibition and the digital edition of codices held outside Mexico, such as Digital Codex Mendoza, are so important.

This effort is the first of a series that will virtually repatriate essential Mexican documents. It serves as a milestone regarding academic digital editions in Mexico and Latin America. Through this work the Instituto Nacional de Antropología e Historia (INAH), or National Institute of Anthropology and History, demonstrates the broad-based utility of this type of edition and the need to seek new forms of representation for such complex systems of knowledge. At the same time, the effort furthers the permanent calling of the INAH to study, preserve, and spread awareness of the cultural patrimony of the Mexican people, and create new ways of engagement with cultural heritage.

Personal note: When I was in Mexico City at the beginning of December, I had the opportunity to experience the Códices de México exhibit at INAH. Below are some images from the exhibit…

Images from the Códices de México exhibit at INAH