Skip to content
Posted to the Ethnos Project by Coppélie Cocq on November 29th, 2013

This blog post discusses indigenous uses of social media with the example of resistance against exploitation of the land and its raw materials in Swedish Sápmi – the cultural homeland of the Sámi, indigenous people of Europe.

A growing conflict in Gállok was in the news in the summer of 2013 in northern Sweden. At the center of this struggle lies the exploratory drillings initiated by a British prospecting mining company and plans for a possible mine. The conflict came to expression through blockades, demonstrations, confrontations between activists and the police, as well as a harsh tone between those in favor of the construction of a mine, and those against.

Gállok is situated in Sámi land. Reindeer herders have used the area since time immemorial. It is also one of many sites where mining companies have been granted prospecting rights: the Swedish Mineral Act is generous and advantageous for foreign companies to prospect and exploit the land for minerals. The prospecting process raises concerns. If an iron ore mine were to be built, it could jeopardize the ability for people of the area to carry out traditional reindeer herding and other livelihoods that imply a close relation to nature. There is also a risk for pollution in the Lule River and the ecosystem of the valley. At the same time, the planning for a mine gives hope to people of this rural area for employment, economic growth and a positive effect for the development of municipalities suffering population decline. At the core of this the struggle we find a heated debate about the exploitation of natural resources in a Swedish context in general, and in Sámi land in particular.

The echoes of the mining boom in Swedish Sápmi reached an international audience at the end of August, when the Washington Post published an article on the topic (unfortunately currently not available online – a mirror of the article available here), and the news rapidly spread on the Internet and through other international newspapers (for instance Fox News).

By then, the debate about the mining projects in Sámi lands had been going on already for several years, and the manifestations on the specific site had taken place for almost two months. But until then, the debate, information and reports were covered and circulated almost entirely through social media. Gállok and the environmental debate related to indigenous land rights is therefore an illustrative example of the role of social media in social and cultural movements. 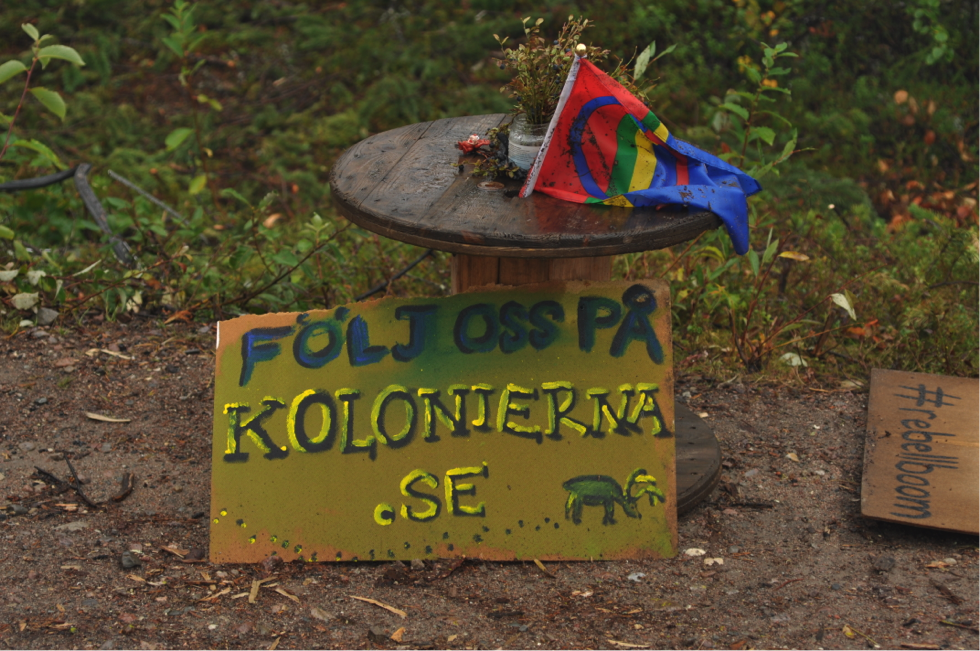 [Follow us on Kolonierna.se, signpost at the Camp Gállok, with the Sámi flag, August 2013]

From July 1st to mid-September, a group of environmental activists, rapidly joined by locals and supported by the part of the population of the area, established a camp in Gállok in order to delay the mining company in drilling and blasting. A series of confrontation with the police occurred that were documented and spread rapidly on social media platforms YouTube, Facebook and Twitter. Activity on social media increased in parallel with the events on the geographical site.

The use of social media in the struggle has implied that a local concern has been framed on a global arena. The issue of a possible mine in Gállok relates to a global debate about indigenous rights and exploitations around the world. Similar issues are discussed in Latin America and Australia. Social media – mainly Facebook, but also Twitter – have strengthened the voice of several communities by underscoring the scope of the problem. Also, they have increased the degree of interplay between online and offline networks and initiatives by helping to organize demonstrations and information exchange.

Communication through participatory media in relation to social movements and resistance implies also that harsh words, threats and slander such as it can occur in conflicts find new ways to emerge and spread. Therefore, the approach of the dynamics of interaction in social media should include aspects of authority and social regulation.

The last action on site took place on September 3rd, and camp Gállok was then packed up. But the resistance movement and the debate continue on Facebook, Twitter and other digital media sites. For the antagonists of the mining project, the debate in its initial phase was located on social media and websites – and it is where it goes on now. But also, the issue of exploitation of natural resources and the Swedish mineral law is now, at last, discussed via national traditional media (radio, newspapers and television programs).

Traditional media have been slow on responding to the call for attention of the Sámi at the beginning of the events of summer 2013. The first updates about the events took place on Facebook, Twitter and YouTube, thanks to the initiative of locals involved in the struggle. Some local media published short reports, but it is much later that international media started writing about the situation. Interestingly enough, national Swedish media were the last publishing articles about what was going on in Gállok…

This flow of circulation of information indicates that social media contribute to reshaping our mode of access to information. When national media do not pay attention to the struggle, social media have a crucial role for voices in the periphery of national interests to reach out and renew the debate.