Skip to content
Posted to the Ethnos Project by Mark Oppenneer on June 23rd, 2012

About the Endangered Languages Project

From the Endangered Languages Project site: Humanity today is facing a massive extinction: languages are disappearing at an unprecedented pace. And when that happens, a unique vision of the world is lost. With every language that dies we lose an enormous cultural heritage; the understanding of how humans relate to the world around us; scientific, medical and botanical knowledge; and most importantly, we lose the expression of communities’ humor, love and life. In short, we lose the testimony of centuries of life.

Languages are entities that are alive and in constant flux, and their extinction is not new; however, the pace at which languages are disappearing today has no precedent and is alarming. About half of the world’s approximate 7,000 languages are at risk of disappearing in the next 100 years. But today we have tools and technology at our fingertips that could become a game changer. 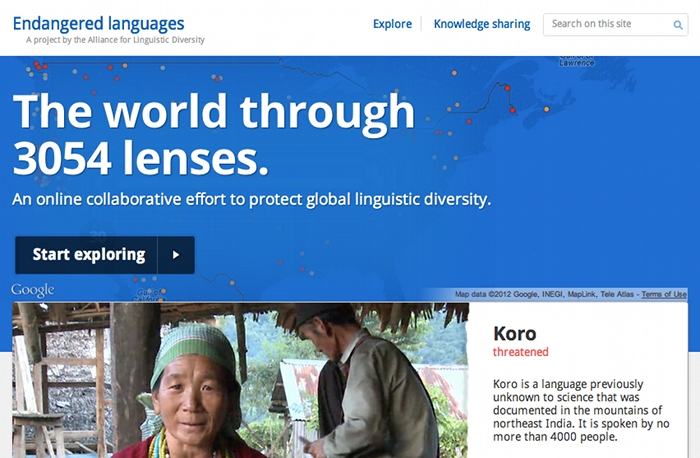 With the Endangered Languages Project, Google puts its technology at the service of the organizations and individuals working to confront the language endangerment by documenting, preserving and teaching them. Through this website, users can not only access the most up to date and comprehensive information on endangered languages as well as samples being provided by partners, but also play an active role in putting their languages online by submitting information or samples in the form of text, audio or video files. In addition, users will be able to share best practices and case studies through a knowledge sharing section and through joining relevant Google Groups.

Google oversaw the development and launch of this project, but the long term goal is for it to be led by true experts in the field of language preservation. As such, oversight of the project will soon transition to First Peoples’ Cultural Council and The Institute for Language Information and Technology (The Linguist List) at Eastern Michigan University in coordination with the Advisory Committee.

I live about three hours from the Onondaga Nation in Upstate New York. Here is what the Endangered Languages page about the Onondaga language looks like: 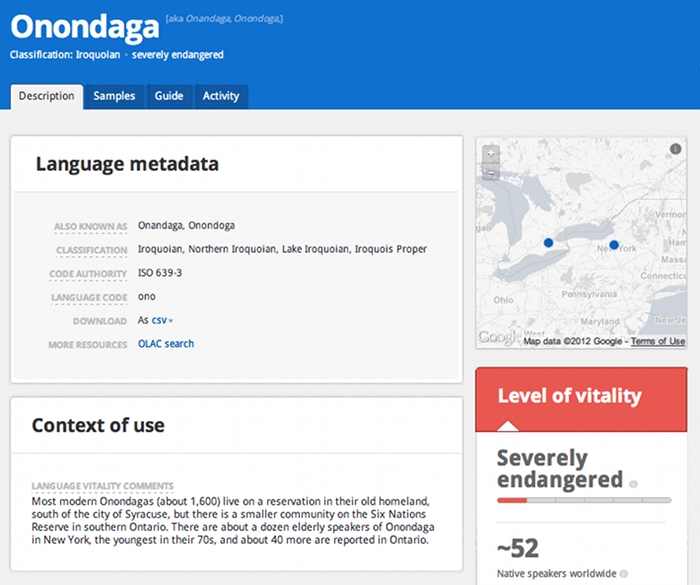 About the language information in the Endangered Languages site

The languages included in this project and the information displayed about them are provided by the Catalogue of Endangered Languages (ELCat), produced by the University of Hawai’i at Manoa and The Institute for Language Information and Technology (The Linguist List) at Eastern Michigan University, with funding provided by the National Science Foundation (Grant #1058096) and supported by a team of global experts. While ELCat is a three-year project that only began in the fall of 2011, it is being shared through this site so that feedback from language communities and scholars worldwide can be incorporated to update the world’s knowledge about its most at-risk languages. This means that the languages included on this site and the information presented about them is intended to change over time.

The full document is presented below. Use the icons to navigate…
To see the document full-screen or print it, use the far right icon or click here.

For more information about the Endangered Languages project, please visit their website.