Skip to content
Posted to the Ethnos Project by Mark Oppenneer on July 23rd, 2014

“A clear question, then, is can this powerful new medium be harnessed as a new platform for passing along wisdom from generation to generation in a culturally appropriate, engaging format?”

Young people of every generation – to some degree – pull away from the mores, ideals, and traditions of their elders and redefine, refuse, and remix the culture. On one hand, the young want to cut their own rug and establish their own identities, and on the other, traditional culture bearers want to sustain and stimulate pride in a rich cultural heritage.

The Cook Inlet Tribal Council in Anchorage, Alaska has responded to this age-old dilemma with a fresh strategy: the creation of Never Alone (Kisima Inŋitchuŋa) a video game steeped in Iñupiat values that draws players of all ages into the heart of a traditional narrative through whimsical and engaging game play.

Special thanks to Laurie Thornton of Radiate for coordinating this interview with the Never Alone team.

Tell us about the genesis of Never Alone. Who decided on a video game as a way to share Iñupiat culture? How was Kunuuksaayuka chosen as the basis of the game over other narratives?

Never Alone started as an idea from Cook Inlet Tribal Council (CITC), a tribal nonprofit organization serving Alaska Native and American Indian people residing in the Cook Inlet region of southcentral Alaska. Located in Anchorage, CITC helps motivated individuals achieve their full potential through an array of support services including education, employment and training and services geared to helping build healthy families. CITC had three goals: to create a new source of revenue that could allow CITC to increase the level of services offered to Alaska Native people; to share Alaska Native culture with new audiences around the world; and to work to provide opportunities for Native youth to take pride in their history.

After much internal debate and discussion, CITC decided that harnessing the power of videogames had the potential to accomplish all three goals in an innovative and fun way but also serve as a beacon that could help reconnect Alaska Native youth back to their own cultural heritage.

Gloria O’Neill, CEO of CITC, conducted an extensive search of possible development partners. During that process, she met Alan Gershenfeld and Michael Angst, co-founders of E-Line Media; a company with a long history of creating games to educate, engage and empower. Together, CITC and E-Line realized there could be a great opportunity to combine expertise and create a compelling game based on Alaska Native culture. Alan and Michael brought on Sean Vesce, a veteran video game designer and creative director to lead the project. 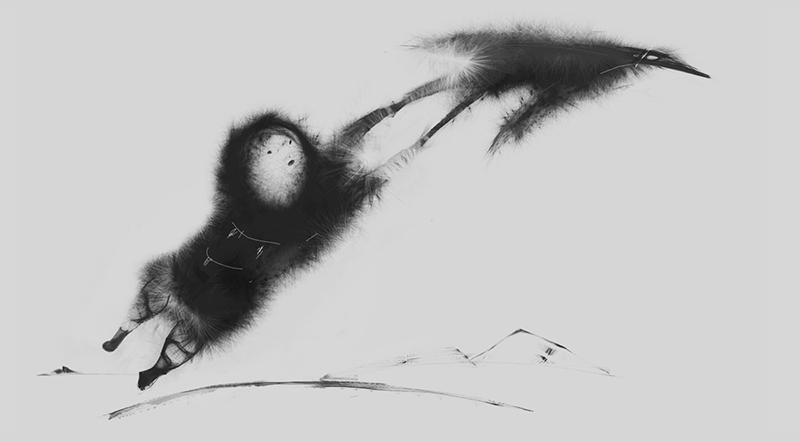 The project began with a deep ethnography built over several extended visits with Alaska Native elders, research at museums and sessions with storytellers and youth. As the team discussed the many possible stories and characters and how they might be used to support the needs of game design, they began to focus on tales with strong characters and a clear narrative arc that could be adapted into the beginning, middle and end of a video game – and had all of the action and thinking ‘verbs’ that are at the core of good gameplay.

From the possibilities, the Iñupiat storytellers involved recommended the Kunuuksaayuka story as a potential narrative spine. After researching, the development team agreed that Kunuuksaayuka had great potential for providing strong storytelling in the context of a game and could allow the main characters to explore diverse and interesting environments.

To ensure that the game respected the wisdom, themes and learnings that are embedded in the Kunuuksaayuka story, the team worked directly with Minnie Gray, the Iñupiaq elder whose father, Robert Nasruk Cleveland, was first recorded relating Kunuuksaayuka. Minnie provided input and suggestions that the team incorporated into the game adaptation. 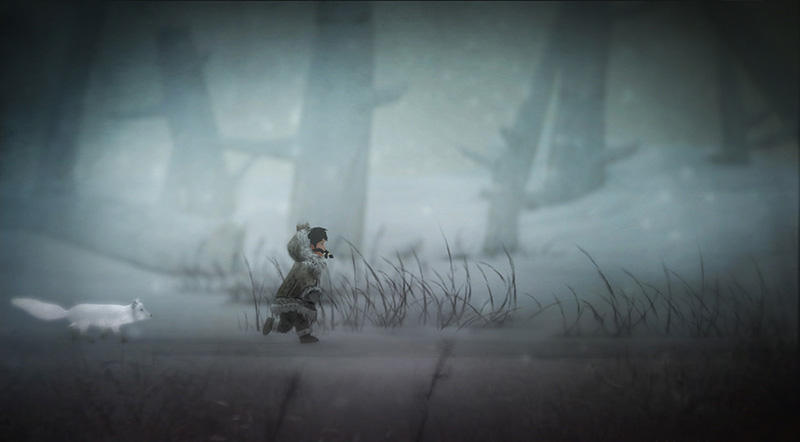 In the Never Alone trailer, the narrator states: “We have so much to share and now we have a way to share it.” Were previous modes of storytelling breaking down? If so, what do you feel video games offer that traditional storytelling doesn’t?

In the modern era, there has been increasing concern that the rapidly changing, highly complex and digitally infused nature of life in the 21st Century has resulted in youth becoming increasingly disconnected from these classic stories and the wisdom of their elders. Those voicing this concern often point to the rapid growth of computer and video games as one of the culprits of this phenomenon.

Despite their ubiquity among youth, digital games are a medium that is largely alien to most elders, creating a concern that the more time youth spend playing these games, the less time they are connecting with their history, culture and values. This is especially true since the depiction of minorities, indigenous peoples and other under-represented communities in popular commercial games is often caricatured, appropriated or inaccurate.

A clear question, then, is can this powerful new medium be harnessed as a new platform for passing along wisdom from generation to generation in a culturally appropriate, engaging format? We strongly believe that the answer is ‘yes’ – but that it won’t be easy. To truly leverage the unique power of this young medium will require multi-stakeholder partnerships among experienced, proven game designers, who fully understand the unique affordances and limitations of the medium, working closely with a diverse groups of elders, youth, storytellers, artists and social entrepreneurs who can collectively represent an indigenous voice in a new, interactive entertainment medium.

Unlike the transition from oral to written stories, digital games represent a fundamentally different and new form of storytelling. Digital games are interactive, participatory and player-driven. They enable players to step into different roles, confront complex problems, make meaningful choices and explore consequences of various choices and strategies. They are active, not passive. Well-designed games offer a delicate balance of challenge and reward that drives deep levels of engagement, enabling players to advance at their own pace, acquire critical knowledge, iterate based on feedback and use this knowledge to accomplish objectives for which they are invested. 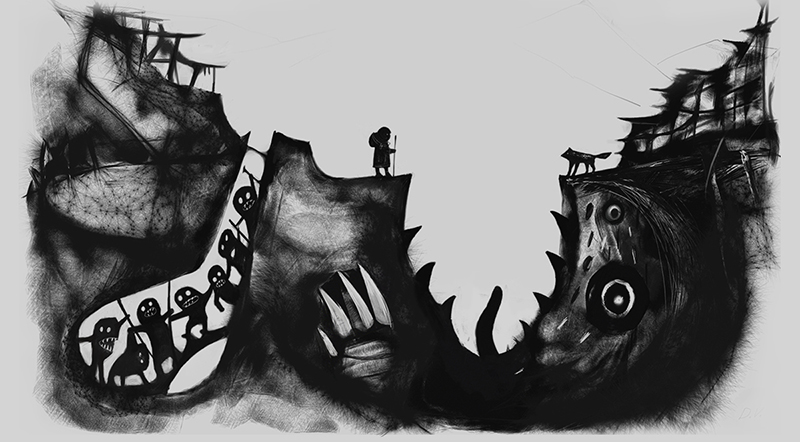 How did E-Line ensure that the community had a sustained say in the entire creative process — and that they didn’t feel their culture was being appropriated or exploited? Were the Iñupiaq participants happy with the final product?

The entire process of research, design, development, marketing and distribution has been done through an inclusive development process build from a foundation of mutual respect, shared vision and an understanding that we bring different backgrounds and skill-sets to the project – all necessary to realize the vision of a game that shares, celebrates and extends Alaska Native culture.

Prior to beginning any core development work, the team met regularly with Alaska Native elders and storytellers to discuss how Iñupiat culture, stories and art could fit into a video game structure.

Together, the stakeholders selected Kunuuksaayuka as the narrative arc for the game and the team worked directly with the Iñupiaq elder most closely associated with the story to ensure that the game captured the most important messages and themes.

Iñupiat elders, storytellers, linguists, artists, youth and cultural advisers have been, and continue to be, intimately involved in all aspects of the game’s design — everything from art and characters to level design to overall narrative arc — from initial concepting to final production.

Nearly three dozen Alaska Native people have been involved during the course of the project; we have been working hard to ensure that the game captures the important aspects of their culture and that the game will successfully celebrate and share the culture with game players around the world. 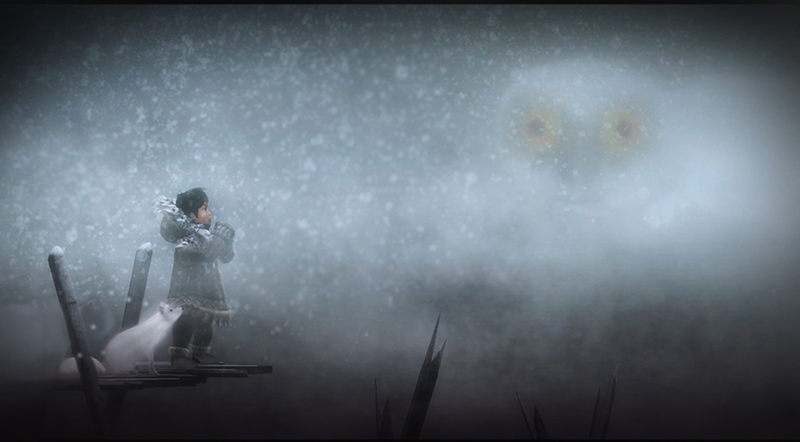 You mention in a recent interview that the decision to feature a female protagonist was a bit controversial. Can you tell us more about those discussions and how you reached an agreement? Are female protagonists common in Iñupiaq storytelling tradition?

We feel that girl characters have been underrepresented in gaming, particularly girl heroes who are powerful and can survive and overcome incredible challenges. Since many of the team members have daughters, we really wanted to create an inspirational role model that could show girls that they can succeed at anything they put their mind to.

The process of alignment on creative direction and decision making is always delicate, requiring patience and empathy — we need to find what ‘feels right’ to all stakeholders and aligns with the core project goals. This decision was an example of where there was a lot of spirited discussion, debate, analysis and final an inclusive decision to go with a girl and fox as the protagonists.

Iñupiat stories are filled with both boys and girls, men and women. The narrative arcs of stories generally downplay character specifics, like gender in order to focus on the important themes, knowledge and values that the story is communicating.

The idea of “games for good” or social learning through gaming is fairly recent. Do you see Never Alone as a teaching tool, as a cultural preservation tool, or as something else entirely? Who is the intended audience for this game and what is the intended impact?

Through Never Alone, we are striving to deliver a world-class game experience that builds upon the stories and culture of Alaska Native people. The game celebrates and shares Alaska Native culture with the world through a commercial game that can successfully compete and ‘rise above the noise’ in terms of consumer entertainment. Much like many successful commercial films and novels explore cultures under-represented in popular media, we believe that games can as well.

We believe that, through inclusive and participatory development, we can extend this model of games based on the traditional stories to new stories, new cultures, and new types of game genres; Never Alone represents the first of what we hope will be many products in this exciting new category of entertainment.

Never Alone is being designed to appeal to all gamers across generations – from younger players to adults who grew up with classic console platform games; as well as something they might play together.

We think fans of such games — traditional platformers such as Rayman and Super Mario, as well as accessible indie puzzle platformers like Limbo, Braid, Fez, Trine and Journey will love the beautiful environments, detailed animation and carefully crafted levels and puzzles.

People who love the artistic passion-project, experiential and less formulaic style of game play cultivated by the “indie” games sector will be drawn to the unique cultural storytelling and authenticity of Never Alone, the first game to celebrate, share and extend an indigenous people’s mythos and culture in video game form.

Gamers who enjoy meaningful game experiences will want to play Never Alone, which incorporates the sensibilities and philosophies of an indigenous people in a faithful and fun way. 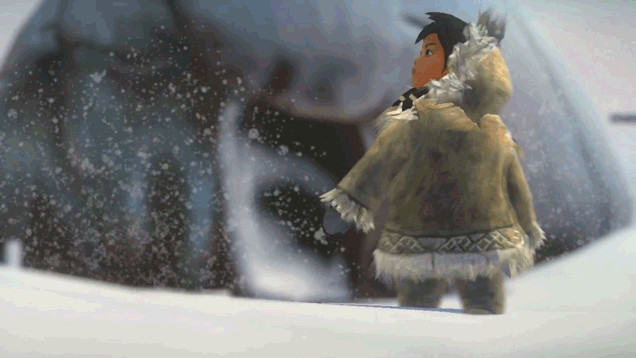 Were any of the ideas presented by the game developers considered to be culturally inappropriate by the Iñupiaq culture bearers? How did the team handle points of cultural dissonance while developing the game?

The significant research that the team invested up-front with Alaska Natives has helped avoid any significant cultural disconnects during the course of the project. However, Alaska Native cultures are rich and complex and it has been challenging to capture important subtleties without the active and extensive involvement of elders, storytellers, cultural ambassadors, etc. The development team has clearly taken on the role of student of Alaska Native culture and leans on the experience and wisdom of its Native partner-teachers to help make choices that are appropriate for the game and to authentically represent the culture – much as our Alaska Native partners have taken on the role of student of commercial video game design, development and publishing. This has been an extremely rewarding process for the entire team.

Never Alone will be released this fall.

Read more – an article on Gamasutra

Thanks to Ethnos Project collaborator Rachael Petersen for contributing several of the questions for this interview!