Skip to content
Posted to the Ethnos Project by Christoph Amthor on May 11th, 2014

In this post, the second in a three part series about Mycitizen.net, Ethnos Project contributor Christoph Amthor moves the focus from societal context to conceptualization.

Mycitizen.net is a free and open-source platform that facilitates social networking of local communities. It has been designed from the outset for the specific needs of civil society, particularly in closed societies and in countries in transition, it can be used with otherwise unsupported languages, where the Internet is very slow, and where the safety of civil society actors requires special privacy protection.

The concept of mycitizen.net stems from two roots:

Firstly, the current reforms in Burma follow a top-down approach and it looks doubtful whether all parts of the population will benefit and get involved as active participants. Obstacles such as a very inequal accessibility of school education or the ongoing discrimination of ethnic minorities are deeply entrenched. I have little trust that the lives of the Burmese people at the bottom of society can simply be improved by pulling up its top end high enough – think of how efficient it would be to lift a stretchable accordion by holding only the upper end. Fortunately, Burmese civil society on the ground is very engaged and local charitable activities have, not least through religious traditions, a firm place in the daily lives of the people. There is no need to import successful models but it suffices to help local activists and concerned citizens become more efficient and self-confident and be able to choose from modern tools to pursue their goals.

Secondly, Burma is going through something that you may call a “handheld revolution.” The country was once infamous for its bad power grid, one of the world’s lowest penetrations of Internet, cell phones and landlines, for a censorship with draconic sentences for the slightest violations, and Burma was one of the countries that “pulled the plug” to prevent the free flow of information during the Saffron Revolution. Only a few months after opening the country, even remote towns of Burma are now lined up with stores selling cell phones and young students show off their smartphones. The omnipresence of handheld high-tech starkly contrasts with the extreme prevalence of low-tech in virtually all other aspects of daily lives. If there will be any development that will reach into every corner of the country, it will certainly be this “handheld revolution.”

It was obvious that we should try to remedy the lack on the grassroots level by using the growing opportunities in terms of technology. The actual timing, however, was more intricate back then in 2011 when we developed the concept: Political reforms had been promised but not yet started and what I described as a handheld revolution was not more than an assumption based on the observed needs and the technical development, a mere projection for the upcoming years. We could, however, not afford to wait for the preconditions to complete before starting our project since this activity was estimated to take at least three years to reach some level of maturity. For me it felt a bit like launching an aircraft to a place where the airport was still under construction. 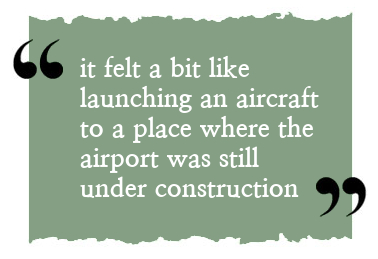 Our organization, Burma Center Prague has always used IT to maximize our outreach with the available resources but we are not actually providing IT-related services as one of our core activities. Many of our supported Burmese “micro-projects” in India evolved around computers and a constant part of our trainings to grassroots activists was about IT literacy on various levels. I personally have grown into the role of the “IT guy”, bringing most of my knowledge from free-time coding and some years studying physics where IT was more about running a program for one week to retrieve a handful of numbers that would make up a graph. But since I got more involved in nonprofit work as the co-founder of our NGO, I was increasingly intrigued by the use of technology and ICT as a tool to promote development and human rights in other countries.

Activities for Burma are not new on the web, which often resembles a cemetary with deserted blogs, stale petitions and abandoned Twitter handles. Activists have embraced each new technology or platform but then they lacked the resources to keep up their engagement or they failed to generate the necessary momentum due to the insufficient IT literacy of the Burmese majority, at home and abroad. Other projects like the Burmese-English dictionaries (here and here) have unexpectedly found their niche in the “Burmosphere” and continue with extremely low maintenance and a userbase graciously sent over by Google Search and some friendly blogs.

I have learned that small can not only be beautiful, but also more likely to survive. A friend of mine is the driving force behind a small CMS that was designed particularly for non-profit needs and that is now used mainly in the Czech Republic and – by a quirk of fate – in Columbia. Other platforms like Ushahidi have been impressively successful with a distinct and powerful image of “IT made in Africa”, or as the team has phrased it for their BRCK: “If it works in Africa, it’ll work anywhere.” But even after looking at similar projects, the question remains: What will work for Burma?

With a clear notion of what was needed, I decided to continue drafting a concept that would best respond to the challenge, rather than picking up existing tools that come somewhat close to it and trying to combine, intersect and adapt them, which always leads to compromises. Maybe the situation is familiar: You use a blogging software as a CMS because of the easiness to install and update plugins; a crowdmapping platform with unneeded functions like a remote check-in, an API for SMS and the possibility to retrieve Tweets, while you would instead appreciate a more robust updating procedure on shared hosting; or a highly configurable discussion forum with an impressive list of extensions where the users eventually stops showing up because they returned to their email client which is dead-simple and just looks and feels better.

The concept for mycitizen.net set out from a simple structure of three basic elements: users, groups, and resources: Individual users obviously correspond to real-world persons. Users then form groups of common interests and concerns. Lastly, users and groups need to have resources available, which are pieces of information (like documents, videos, audio recordings and events) that can point to anything on the web or in the real world. 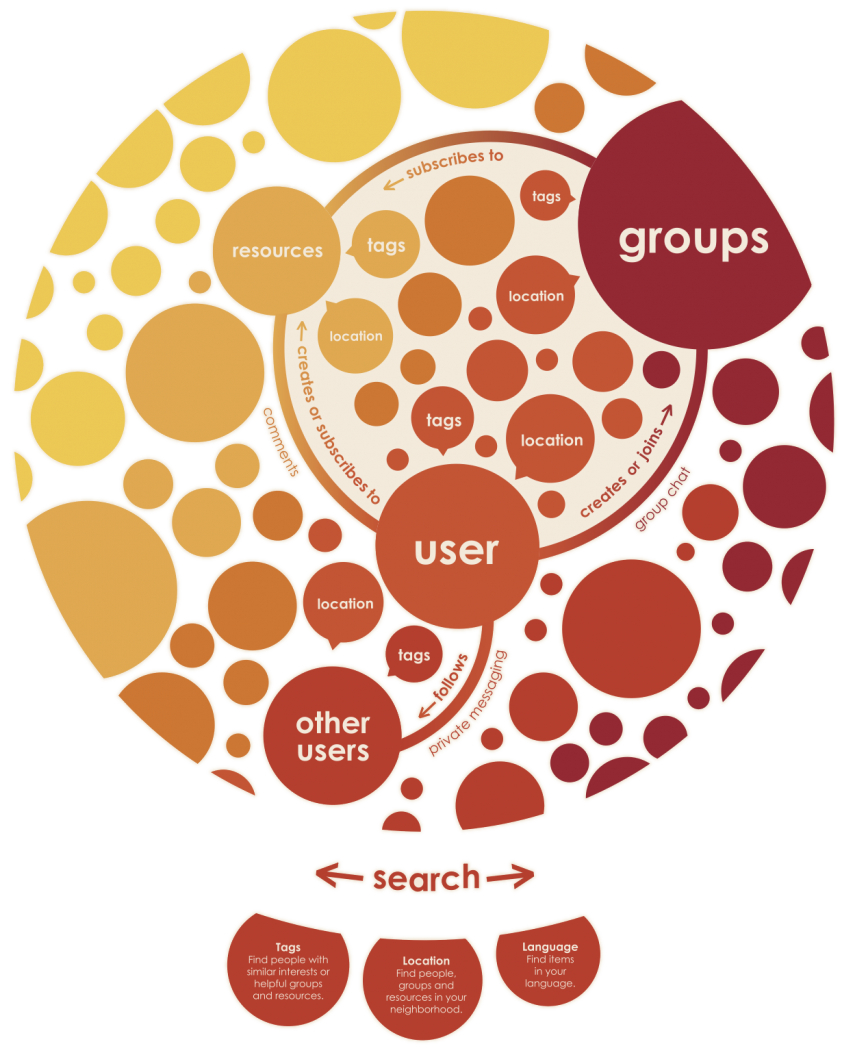 Each item of these three types can be enriched by a set of metadata: tags denote the concerns, interests or fields of activities; a location can be set on a map; and a language describes users, groups and resources on multi-lingual deployments. The metadata can help users identify other items: A user can, for instance, search for hospitals providing HIV treatment around her home town, or globally for groups of people who have the same concern.

The concept of relevance has therefore been conceived differently than on many social media platforms where the value of information degrades with time, placing the latest news on top, or where popular items push others out of sight, as known from Facebook with its “edge rank” mechanism. We understand relevance as a very personal assessment, which you are able to control at any time. If, for example, your family member has an anaphylactic shock, information that is usually irrelevant may suddenly become the most relevant for you.

As another important feature, users need to remain in control of their privacy, particularly since many civil society activities require special safety protection. For all items, therefore, a visibility level can be set to “world” (even non-members can view it), “members” (only people signed-in can view it) or “private” (only directly connected users can view it). Needless to say, all data remains on the deployment server and is not shared with third parties.

Lastly, the platform should be accessible also from a mobile application. Since we wanted to distribute the final product as Open Source, the app should be able to connect to any deployment that is accessible from the Internet. One advantage of mobile apps is the fact that you need a much smaller data flow to use a service, making them already today the prefered tools to use the Internet in Burma.
To illustrate these features in a possible usage scenario, think of a school campus in a very remote area that installs the platform on a small server and allows their staff and students to get connected through a local network via cable and wifi.

People can therefore share information and chat without having to worry about connectivity problems in their region since most of the data (an exception is currently only Google Maps) doesn’t require Internet access. Since the technical requirements are low, any group of friends can run their own deployment on an ordinary PC and get connected with their laptops and smartphones. For those groups that find it difficult to install and maintain the software on their own servers, we plan to offer a hosted turn-key solution.

Mycitizen.net in the Resources Database