Skip to content
Posted to the Ethnos Project by Mark Oppenneer on May 16th, 2012

Nine groups were formed, with the aim to have a specific issue addressed. The Indigenous Heritage and Education group members are Lance Ashley from Hodgson Downs, NT, Timmy Watson from Hodgson Downs, NT, Angus Gallagher from Armidale, NSW and Todd Hayes from Eddington, Vic, together they have outlined below how they think they can make a difference.

Have you ever wondered about the traditional owners of the land you’re on? And not known where to find out about their cultures and traditions? As the ‘Indigenous Heritage and Education’ working group at the Heywire Regional Youth Summit, our aim was to create a new way to educate Australians about the ancient and diverse culture and history of our country.

We came up with Blacktracker.

Blacktracker is a GPS software and a smartphone app that notifies the user of information about the traditional owners of the land they are on.

Blacktracker provides information on tribal names, languages, traditions and customs, some Indigenous history including links to stories, other relevant websites and landmarks and points of interest in the region the traveller is in.

Used in a car the GPS software could provide commentary on the country you are driving through and its significance to traditional owners. We believe this road trip with a difference would appeal to international and local travellers, from backpackers to ‘grey nomads’.

The template for this software is based on the Indigenous Language Map and software used in GPS navigation devices. Information for this software could be gathered in collaboration with local governments, Aboriginal Land Councils, other local authorities and the Australian Institute of Aboriginal and Torres Strait Islander Studies (AIATSIS). 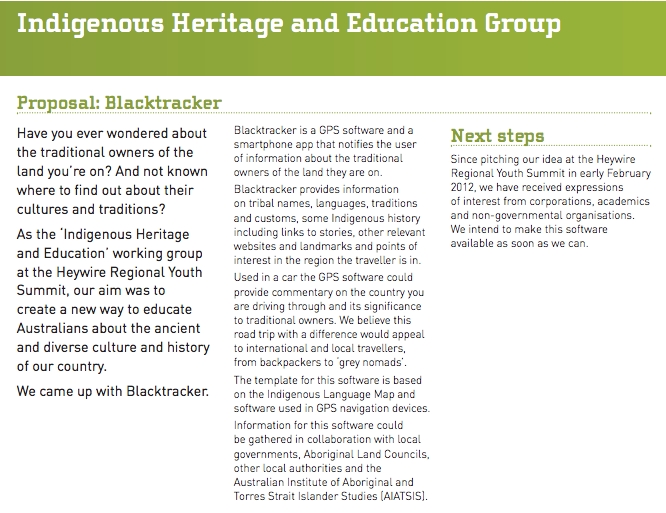 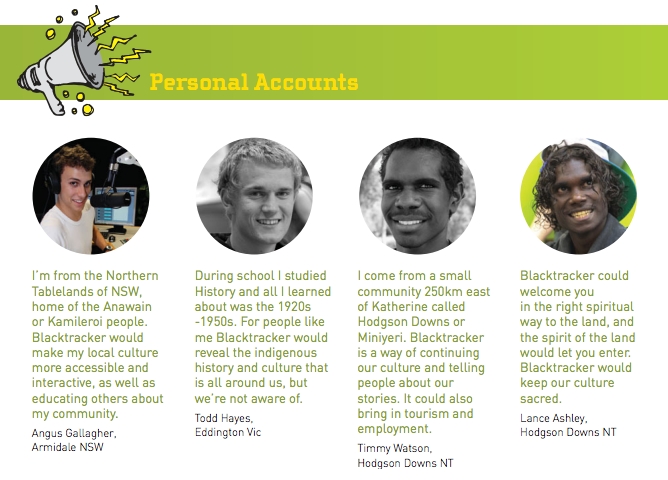 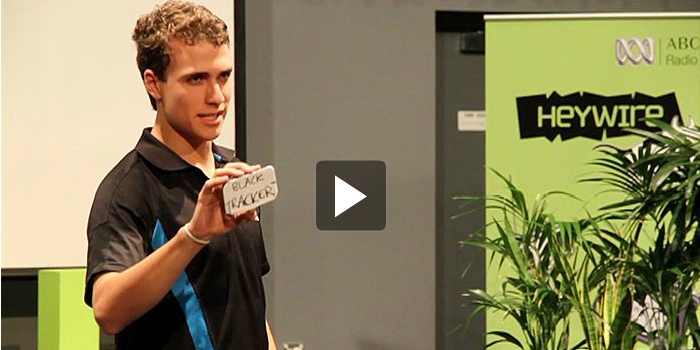 There is an apparent lack of public knowledge about the local Aboriginal culture in Armidale. Having said that, I am not even of the Anawain or Kamileroi tribes, thus it would be inappropriate for me to comment further.

I am Aboriginal, but I’m not from here. By birth I’m from God knows where. My father is currently compiling an extensive family tree but the further back it goes, the more I feel like I could be from anywhere within 1,000 clicks of this place.

I moved here aged six from Sydney and beyond that I really have no idea where I’m from.

As my father’s family tree grows I become more and more aware of how many people I really am related to, but I still have no idea of where I’m from exactly or who I really belong to.

My father grew up not publicising his Aboriginality for fear of being ostracized. His grandmother, who would have been a wealth of information having been raised by a mother from the land, spent her whole life pretending to be anything but Aboriginal.

I have struggled with my Aboriginality. I feel comfortable living within white society, though guilty sometimes, seeing myself as snobbish. I do long to understand my cultural heritage and to learn about the customs and the way of life of my people.

For more information about Heywire, please visit their website.